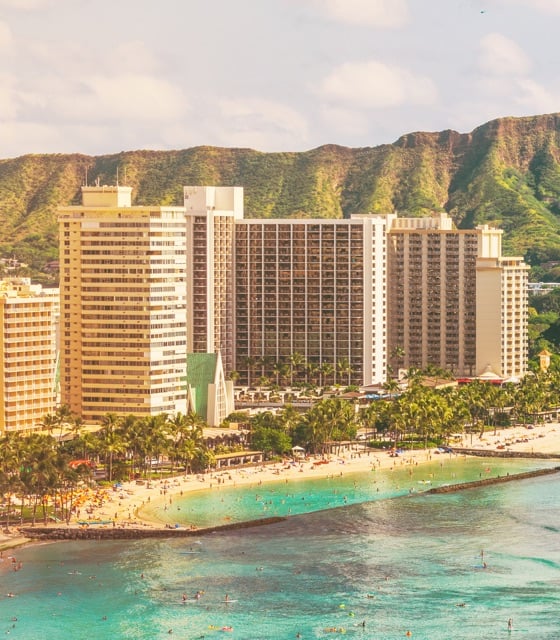 Hawaii comprises nearly the entire Hawaiian archipelago, 137 volcanic islands spanning 1,500 miles (2,400 km) that are physiographically and ethnologically part of the Polynesian subregion of Oceania. The state’s ocean coastline is consequently the fourth-longest in the U.S at about 750 miles (1,210 km). The eight main islands, from northwest to southeast, are Niʻihau, Kauaʻi, Oʻahu, Molokaʻi, Lānaʻi, Kahoʻolawe, Maui, and Hawaiʻi, after which the state is named; it is often called the “Big Island” or “Hawaii Island” to avoid confusion with the state or archipelago. The uninhabited Northwestern Hawaiian Islands make up most of the Papahānaumokuākea Marine National Monument, the nation’s largest protected area and the third largest in the world.

Of the 50 U.S. Hawaii is the 8th smallest region and the 11th least populated, but the 13th most heavily populated, with 1.4 million inhabitants. Two-thirds of the population lives in Oahu, which is home to the nation’s capital and largest city, Honolulu.

Every major island is surrounded by a network of state roads. Only Oahu has federal motorways and is the only area outside the 48 contiguous states to have signed interstate motorways. Narrow, winding roads and congestion in populated areas can slow travel. Every large island has a public bus service.

If you’re wondering how long it takes to ship a car to Hawaii from the mainland, or from the mainland to Hawaii, it depends on the pick-up and delivery locations. Overall, shipping a vehicle to Hawaii typically takes anywhere from 8 to 19 days.

If you’ve decided to move your vehicle to Hawaii, it’s time to start looking for the best vehicle shipping quote. The cost of shipping a car to Hawaii from the mainland, and vice versa, depends on several different factors, including:

It should be noted that not all auto transport companies offer car shipping to Hawaii, but Tempus Logix, being one of our highest-ranked auto shipping brokers, provides auto shipping services anywhere in the U.S., including Hawaii islands.

Tempus Logix has transported hundreds of vehicles from and to Hawaii. We are working nationwide, shipping vehicles across the United States. Thousands of satisfied customers. Experience in shipping a huge variety of vehicles – Vintage cars like 1900’s Ford Model T, Cadillac Model F, exotic cars like Lamborghini Aventador Sv, McLaren 720s and many more!

Trust us your vehicle and do not worry about the safety.