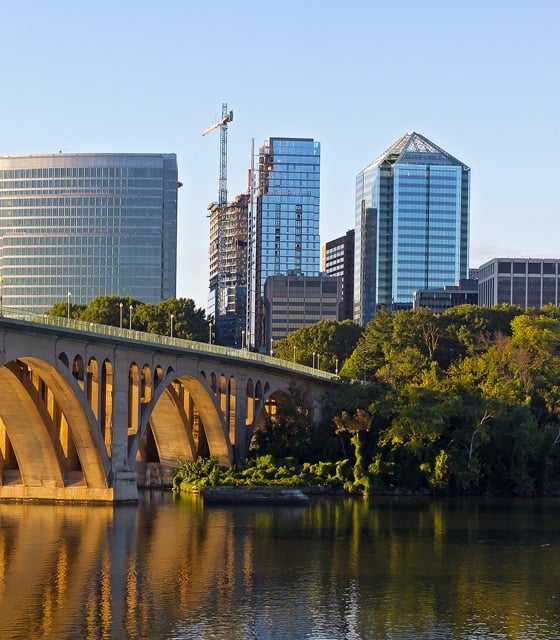 Washington, D.C., formerly the District of Columbia and otherwise known as D.C., or simply Washington, is the capital of the United States. It is located on the east bank of the Potomac River, which forms its southwestern and southern border with Virginia, and shares a land border with Maryland on its remaining sides. The city was named for George Washington, the first president of the United States and a Founding Father, and the federal district is named after Columbia, a female personification of the nation.  As the seat of the U.S. federal government and several international organizations, the city is an important world political capital. It is one of the most visited cities in the U.S., seeing over 20 million visitors in 2016.

The city is divided into quadrants centered on the Capitol Building, and there are as many as 131 neighborhoods. According to the 2020 Census, it has a population of 689,545, which makes it the 20th-most populous city in the U.S. and gives it a population larger than that of two U.S. states: Wyoming and Vermont. Commuters from the surrounding Maryland and Virginia suburbs raise the city’s daytime population to more than one million during the workweek. Washington’s metropolitan area, the country’s sixth-largest (including parts of Maryland, Virginia and West Virginia), had a 2019 estimated population of 6.3 million residents.

There are 1500 miles (2400km) of streets, walks and avenues in the area. Due to the motorway revolts of the 1960s, much of the interstate road network proposed in the middle of Washington has never been built. Interstate 95 (I-95), the main road on the country’s east coast, bypasses the district to make up the eastern part of the capital Beltway. Instead, some of the proposed highway funding has been allocated to the region’s public transit infrastructure. The Washington Metropolitan Area Transit Authority (WMATA) operates the Washington Underground, the city’s rapid transit system, and Metrobus. Both networks cover the district and its suburbs. Metro opened on 27 March 1976 and, starting from 2014, consists of 91 stations and 117 miles (188 km) of track. With an average of approximately one million trips each day of the week, Metro is the second busiest rapid transit network in the country. Metrobus serves over 400,000 commuters every day of the week and is the fifth largest bus network in the country.