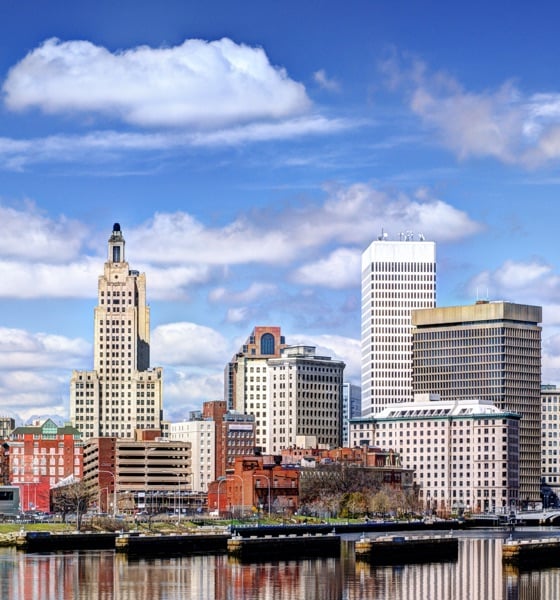 The State of Rhode Island is found in the New England area of the United States. It is the smallest U.S. state by area and the seventh-least populous (1,098,163 according to the 2020 census), but it is also the second-most densely populated behind New Jersey. The state is named after Rhode Island; however, much of the state is on the mainland. The state has land borders with Connecticut to the west, Massachusetts to the north and east, and the Atlantic Ocean to the south via Rhode Island Sound and Block Island Sound. It also shares a small marine boundary with New York. Providence is the state capital and the largest town in Rhode Island.

Interstate 95 (I-95) crosses the state from the southwest to the northeast, connecting Rhode Island and other states along the east coast. I-295 operates as a ring road partially surrounding Providence to the west. The I-195 motorway offers limited access from Providence (and Connecticut and New York via I-95) to Cape Cod. Originally built as the most easterly link in the extension (now canceled) of the I-84 from Hartford, Connecticut, part of the United States. Highway 6 (US 6) across northern Rhode Island is a limited access and connects I-295 with downtown Providence.

Several Rhode Island highways extend the state’s limited-access highway network. Route 4 is a major north-south freeway linking Providence and Warwick (via I-95) with suburban and beach communities along Narragansett Bay. Route 10 is an urban connector linking downtown Providence with Cranston and Johnston. Route 37 is an important east-west freeway through Cranston and Warwick and links I-95 with I-295. Route 99 links Woonsocket with Providence (via Route 146). Route 146 travels through the Blackstone Valley, linking Providence and I-95 with Worcester, Massachusetts, and the Massachusetts Turnpike. Route 403 links Route 4 with Quonset Point.

Tempus Logix has shipped hundreds of vehicles from and to Rhode Island. We work with a huge network of certified and insured carriers to secure the timely and safe transportation of any kind of vehicle, whether it’s a huge pickup truck, a luxury half-million-dollar vehicle, or your daily driving cars. We also ship motorcycles, heavy equipment, and boats all over the US.

At Tempus Logix, our representatives with years of experience in all types of shipments are prepared to answer any questions you may have and resolve all problems during the process without you even knowing about them.